Amazon, CBS, eBay, Nike, Target and Viacom are among the 30 major American companies that have signed an amicus brief asking the Supreme Court to rule on Virginia’s same-sex marriage ban.

Their rationale is that the uneven recognition of marriage equality in the U.S. places an undue burden on corporations.

Well, if you want to change laws in this country, showing how they hurt corporations is a pretty good start.

An excerpt from the brief:

We are located or operate in states across the country, some of which recognize marriages of those of our employees whose spouses are of the same sex, and others that prohibit marriages between same-sex couples and refuse to recognize existing same-sex marriages.

This dual and continuously shifting regime uniquely burdens amici. This legal uncertainty exposes us, as employers, to unnecessary cost, risk, and administrative complexity.

In addition, this irresolution hampers our efforts to recruit and retain the most talented workforce possible, placing us at a competitive disadvantage. Our success depends upon the welfare and morale of all employees, without distinction.

The full list of corporate signers is below. (Note: Logo/NewNowNext is a subsidiary of Viacom Inc.): 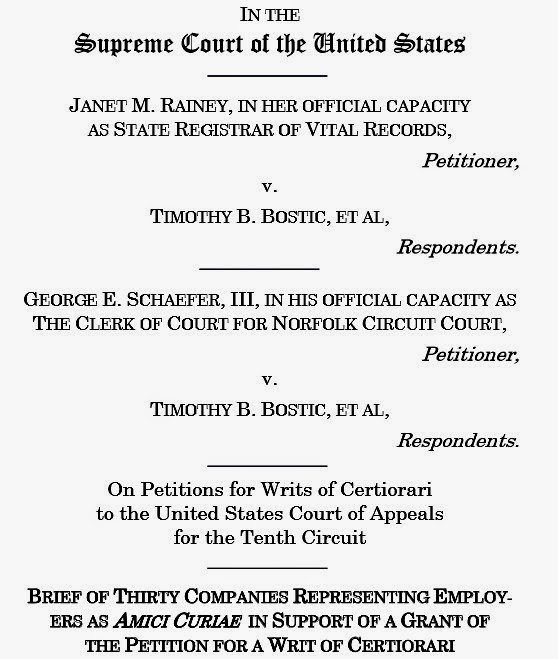 A challenge to Virginia’s ban filed by American Foundation for Equal Rights won this year in both the U.S. District Court and in the U.S. Court of Appeals. But Attorney General TK is appealing those decisions—and both the state and plaintiffs agree SCOTUS needs to make a final decision.

“This case is about justice and about redeeming the constitutional guarantee of equality for countless gay and lesbian couples that has been denied for far too long,” said AFER executive director Adam Umhoefer. “…We are prepared to argue the case for freedom and equality for all couples across the nation, and the Supreme Court must rule in favor of the fundamental right to marry for all Americans.”