America celebrated its independence on July 4th, but in Philadelphia—the birthplace of independence—thousands were celebrating the birth of the LGBT rights movement.

In was in 1965, four years before Stonewall, that Frank Kameny, Barbara Gittings and 38 other activists marching with pickets in front of Independence Hall, demanding civil rights and fair treatment.

Barbara Gittings at the 1964 Annual Reminder

It was the largest gay rights demonstration in the world at the time, and marked the first time activists from different cities came together to fight for justice. Called the Annual Reminder, the protest was repeated yearly until 1969. (Kameny was recently honored by the Labor Department for his efforts on workplace rights.) 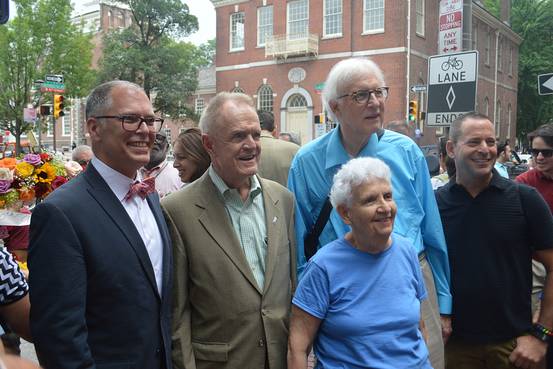 Fifty years later to the day, some of those very activists were on hand for the LGBT 50th anniversary celebration, where participants re-created that original protest—right down to the same slogans on their signs.

The July 4th event was the culmination of numerous events throughout the week, including panels, parties, a screening of Gay Pioneers  and “Speaking Out for Equality: The Constitution, Gay Rights and the Supreme Court,” a temporary exhibit at the National Constitution Center.

Related: SCOTUS Plaintiff Jim Obergefell: “I Know My Husband Can Rest In Peace

“I’m a happily married woman in all 50 states,” Sykes joked with the crowd. “But I’m not sure I’m going to go test the water in all 50 states yet. I’ll let them get a little bit used to it first.”

Others took a more somber tone.

“Fifty years ago, America perceived us as degenerates,” said Equality Forum’s Malcolm Lazin, who organized the anniversary events. “One of the many goals of the gay pioneers was to demonstrate that we are first-class American citizens.”

As members of the Gay and Lesbian Latino AIDS Education Initiative (GALAEI) marched with banners calling out issues facing the new generation of queers, activist Tamika Butler reminded us there are still many challenges ahead.